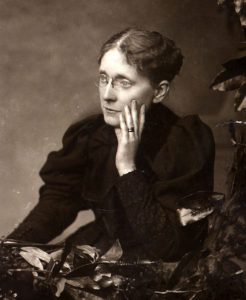 Willard School was named in honor of Frances Willard (1839–1898), an American educator, temperance reformer, and women’s suffragist. Her influence was instrumental in the passage of the 18th (Prohibition) and 19th (Women’s Suffrage) Amendments to the United States Constitution. An ambitious, intelligent woman frustrated with the constraints society placed on her sex, Willard recognized in the 1870s that temperance was the reform cause most attractive to women moving into public life. In 1879 she was elected president of the Woman’s Christian Temperance Union, the largest women’s organization in the country, and remained its leader until her death in 1898. Under her leadership, the WCTU transformed from a conservative temperance organization into a broader woman’s rights movement with a range of social concerns, including the right to vote. Willard’s slogan was “Do Everything,” and her many causes included federal aid to education, free school lunches, the eight-hour work day, national transportation, and strengthening laws against rape and child abuse.

Her spirit of personal adventure and liberation led her to take up bicycle riding in her fifties. As she described in her enthusiastic book about the experience, A Wheel within a Wheel; How I Learned to Ride the Bicycle, she viewed the “conquest” of the bicycle as similar to the mastery that women needed to achieve over the “wider world.” In her day, Willard was one of the most famous women in America–many schools and other institutions were named for her well into the 20th century. Two thousand people attended her funeral at the Broadway Tabernacle in New York City, and an estimated twenty thousand more paid their respects by visiting her casket at the Women’s Temple in Chicago. She was the first woman to be depicted in Statuary Hall at the United States Capitol. Twenty-two years after her death (and four years after the founding of Berkeley’s Willard School), American women finally won the right to vote in 1920.