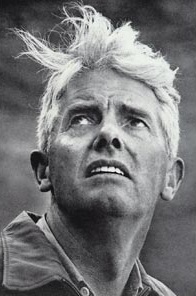 Berkeley born and raised, David Brower is widely considered the founder of the modern environmental movement. His advocacy led to the establishment of nine national parks and seashores, and he was instrumental in passing the Wilderness Act of 1964. A passionate activist, Brower’s fiery style led to clashes with both friends and foes. He is the “Archdruid” featured in John McPhee’s Encounters with the Archdruid, which chronicled Brower’s confrontations with miners, developers and the United States government as he fought to save wilderness from destruction. He was the first executive director of the Sierra Club and the founder of Friends of the Earth and the Earth Island Institute, which gave rise to organizations such as the Rainforest Action Network, among many others. Brower died on November 5, 2000, one day after casting his absentee ballot for Presidential candidate Ralph Nader. The David Brower Center in Berkeley, opened in 2009, honors his memory by serving as headquarters for both the Earth Island Institute and Friends of the Earth as well as dozens of other environmental nonprofits dedicated to “making sustainable thinking and practices mainstream.” Brower’s love of nature was instilled in childhood, when he enjoyed many family camping trips and long hikes in the Berkeley hills. His time at Willard Junior High is little documented, but he did leave his mark with a short piece of fiction published in the December 1925 Target: “Cyrus’ Happy Thought,” a comic tale about an ornery Texas cattle rancher.