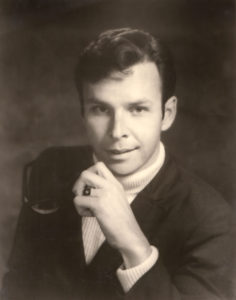 in the late 1950s, he made an immediate impression. Author Patricia Polaccco, one of his first students, recalled, “This glorious, elegant handsome young man walked into the classroom. He was one of those spontaneous teachers far ahead of his time. He’d do things like incorporate the songs from Broadway musicals into our lessons. All of us, especially the girls in class, thought he was the greatest thing since sliced cheese.”

“He was very tall and had a colorful wardrobe heretofore unseen by a junior high school student body,” wrote Peter Mintun, a New York pianist and music historian who attended Willard in the early 1960s. “He had wavy hair like a movie star, drove an English sports car with the top down, wore jewelry, smoked cigarettes, and wore stylish sunglasses. He would have fit in with Sammy Davis Jr.’s crowd.”

Felker was a native Californian who grew up in Stockton. His love of the arts was nurtured at the University of the Pacific. Upon graduation he could not wait to move to the Bay Area, where he began teaching at Willard while still in his twenties. He soon became involved in school drama productions, and persuaded Principal Arthur Shearer to let him lead a boys’ glee club, where he shared his passion for Broadway musicals. Not unlike Professor Harold Hill of The Music Man, George was able to draw out the talent of many a shy student and make him or her a star in front of an audience of cheering students. He did this for adults as well, directing numerous amateur theater groups throughout the Bay Area and giving voice lessons. His delight was infectious. Mintun recalls that for a faculty production of Hello, Dolly! Felker cast typing teacher Eleanor Rice in the lead role and was overjoyed by the ovation lavished upon her by her younger peers. “He said she felt she was a queen for a day,” wrote Mintun.

Felker’s irrepressible spirits sometimes got him in trouble. Willard alum Tom Spivey remembers a 1970 field trip to San Francisco, where the students were supposed to see the musical 1776 at the Curran Theater. But on the spur of the moment Felker decided to take the students next door to the Geary Theater, to see Hair. This caused a minor scandal with Willard parents and administrators, since the show featured onstage nudity.

Felker was more than a colorful character, though. His former students and friends describe a dedicated teacher and a man of infinite kindness. Mintun remembered that Felker “took me, a very shy boy, under his wing and gave me the responsibility of playing the piano every day in Glee Club… He gave his students adult responsibilities and never talked to them like children. In return, the students respected him like no other.” Polacco, who had learning disabilities and still could not read by the time she reached junior high school, said that Felker “saved my life—in more ways than one.” It was George Felker who defended her from bullies and found a specialist who taught her to read. “Mr. Felker pulled me out of this darkness and into the light,” said Polacco, who later wrote a book honoring her teacher. “To this day, when I think I can’t face something, I feel George Felker’s hand on my back, and I know I can get through it.”