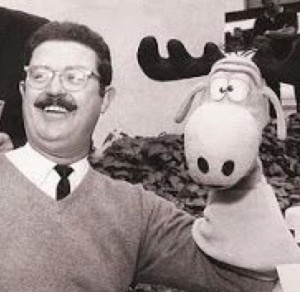 The man behind television’s “The Bullwinkle Show” and “Fractured Fairy Tales” was born September 20, 1920 in San Francisco. He was christened J (no period) Troplong Ward; his parents figured he could choose a first name when he got older. In Willard’s yearbook he is listed simply as “J. Ward.” (In a running joke, many of Ward’s animated cartoon characters had the middle initial “J”—cartoonist Matt Groening, of The Simpsons fame, also gave the middle initial “J.” to many of his characters in tribute).

Ward attended Berkeley schools and earned his MBA at Harvard before returning to Berkeley to set up business as a real estate agent. The cartoon magic started in 1947 when Ward’s childhood friend and fellow Willard grad, cartoonist Alex Anderson, approached Ward about launching an animated series, with Anderson providing the artistic talent and Ward the business acumen. Their fledging business, Television Arts Productions, operated out of a converted garage behind Anderson’s parents’ house on Stuart Street. Among their creations were a flying squirrel named Rocky and his moose pal Bullwinkle (his name came from the Bullwinkel Motors, a Berkeley car dealership). Anderson and Ward eventually went their separate ways, with Ward taking the series to success in Hollywood. The cartoons captivated audiences young and old with a trademark mix of lowbrow and sophisticated humor that sprang directly from Ward, a tireless prankster with a taste for nonstop jokes and puns. The 1933 Willard yearbook records the following exchange: