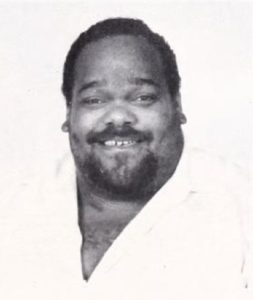 the nickname “Grizzly” during his career as a weight lifter, and later adopted the Muslim name Saad Muhammad. To students he was “Grizz,” the big man with the huge heart who served as mentor and father figure to hundreds of kids. Born in Berkeley, Grizz pursued a career as a weight lifter and strongman after high school, traveling the globe and earning a place in the Guinness World Book of Records for the largest biceps. After retiring from competition in 1987, he found a job working for the Berkeley school district as a campus monitor and school safety officer, coming to Willard in 1989. More than a safety officer, Grizz was a counselor and confidante who provided students with practical advice and ongoing encouragement. He also had a stint as the school’s wrestling coach and in that capacity was more than a coach, again providing counsel and emotional support to the students. “He was a big mountain of man with a booming voice softly extolling the virtues of a getting an education and leading a disciplined life,” recalled his friend and colleague Richard Hourula. “Students loved him. He in turn loved students and loved life.” It was at Willard that Grizz met and fell in love with instructional aide Jennifer Vital. In 1997 they married in the Willard courtyard where they had met, in a joyous ceremony attended by faculty and students. After his untimely death in 2002 at the age of 41, Willard hosted a celebration of Grizz’s life. The “Grizz Turnaround Award” is presented annually to a student who has shown the greatest personal change and growth while at Willard.