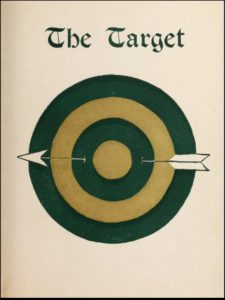 The name of Willard’s yearbook, The Target, predates the school’s founding, going back to a literary magazine originally published at McKinley Elementary School. Alice Lorraine Andrews, who graduated from McKinley in 1907, wrote a poem urging fellow students to aim for the “target” and stay on track with their goals. The Target migrated to Willard when the new junior high school opened in 1916. Early Targets were literary magazines, published quarterly; after World War II, the Target was published annually and more resembled the modern school yearbook.

Alice Andrews was born in Hawaii in 1889, the daughter of Lorrin Andrews of Hawaii and Alice Newell of California. About 1905 her parents separated, and Andrews moved with her mother to Berkeley, attending McKinley, Berkeley High, and UC Berkeley, where her many accomplishments included winning a poetry prize and heading the Associated Women Students of the University of California. She published two volumes of poetry and essays in later life, and left a large collection of materials to the Bancroft Library.

In 1982, the staff of the yearbook found Ms. Andrews, then 93 years old and still living in Berkeley, and decided to honor her with a dedication. “It is with great pleasure that we dedicate the 1982 TARGET to the woman who gave the book its name. Hoping for a perfect TARGET, without error, The Yearbook Staff.” Alice Lorraine Andrews lived for another decade, dying on her 102nd birthday, March 20, 1991. She is buried in Hilo, Hawaii, next to her father.